The memo technique that sets you free from the need to get a pen and paper! 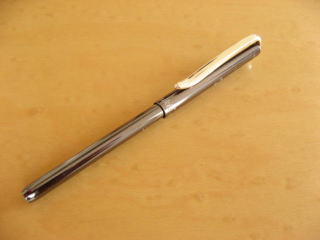 Ideas are such that you never know when one is going to come along.

Rather than when you are groaning over your desk, it is more often when you are walking through the city or riding on a train and have, on the contrary, completely forgotten about ideas and so on, that one unexpectedly comes.

I think the only way of preparing for this is to always walk around everywhere carrying a pen and paper. If it is a weekday, a pen and note paper in the chest pocket of work clothes or a suit is a common thing, but, when it comes to a day-off and the attention has loosened a little, there is a tendency to carelessly forget to carry pens and so forth around.


Ideas, unlike us, can’t be asked to conform to a five day, weekdays only work-week, so, they also come along mercilessly during days-off too.


If you don’t prepare for this beforehand it is possible that you will regret it later.


So, taking some trouble to carry around a notebook and pen is a mustn’t.


Although, somehow, this seems an odd thing to say, here’s an idea that lets you put a pen and paper in something you normally carry around with you anyway. This prevents the act of forgetting in the first place.

To name the things that you definitely carry with you on weekdays and weekends, I guess it probably comes down to a mobile phone, house keys and then a purse or wallet. 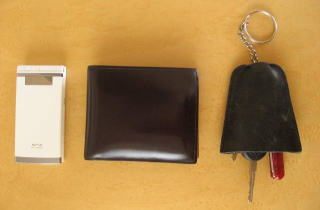 To be certain there is a way of taking notes with a mobile phone.

However, if unaccustomed to numeric key entry it can be complicated and, there can be times when you want to record an idea with an illustration. At such times, after all, nothing can beat a pen and paper.


So now the wallet is in the spotlight.


Firstly the pen; and there is one called the “Walkie Pen” made by the Sanpo company.

(This picture aims to reflect the actual size)


This is a very slim and small pen, with a full length of only about 8cm.
This pen is extremely convenient for clipping over the midsection of the folding type of wallets.

These compact pens are widely and variously available for diaries and so forth, but what is good about this “Walkie Pen” is that, while still being just as small, it is in the position of having an attached clip.

The usual kind of pens have a clip attached in a position slightly below the top of the pen, but on the “Walkie Pen”, the clip projects from the very top part of the pen.

Due to this, even when kept clipped onto the pocket for note currency in a wallet, the top of the pen doesn’t stick out from the wallet and it is possible to store it neatly.


Moreover, it happens to be a good thing that the crease of the fold in the middle of a wallet is currently dead space, so, even when the wallet is folded firmly, the pen doesn’t become the slightest bit obstructive. 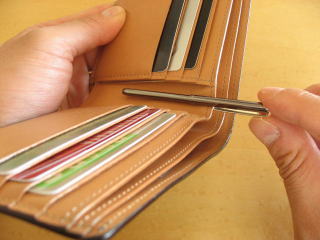 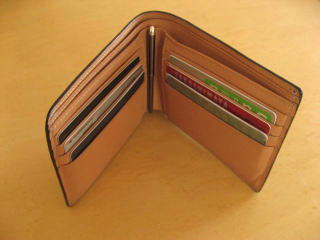 Although this is to say that there is a pen in your wallet, money can go in and out without you hardly even being aware of it. 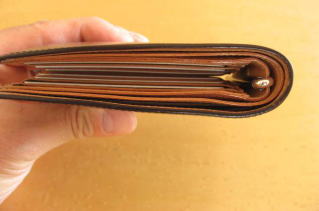 Well, this pen is good to neatly store in a wallet but what of its performance as a writing implement?

Twist the body and the pen tip appears. However, it differs to the general twist type of pen in that only after turning it approximately two complete rotations does the tip of the pen finally appear. 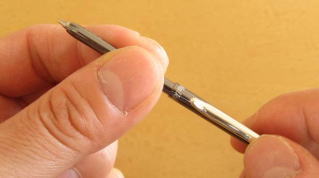 The tip of the pen is re-stored by turning in the opposite direction but, if you turn it as far as it will go the neck axis of the pen will come apart and fall off, so you must choose exactly the right place and consciously stop turning. 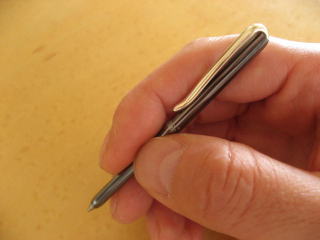 Indeed, it is not appropriate for transcribing for a long time, however, it can be used quite adequately, as in this case, for the purpose of transcribing an urgent idea.

Next, for memo paper that can be kept in a wallet, the “Post-it Style Card Note” by Sumitomo 3M, is recommended. 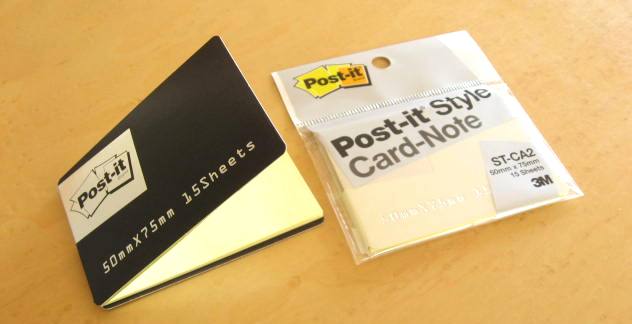 Inside a hard cover that is slightly smaller than a credit card, 15 peel-off Post-it Notes are stored.

It might well be that you think that you don’t specially need to use these ones and that the usual Post-it Notes can be put in as they are. 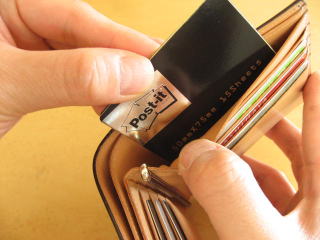 However, in the intensity of getting things in and out of a wallet, Post-it Notes quickly come apart and it can be that, when they are really needed, they are of no use.

If using this hardcover type it firmly protects the Post-it Notes inside.

Moreover, the hard cover also takes the role of temporarily protecting your written note. The written note can be stuck back inside the hard cover for the time being and put away inside your wallet and then, on returning to your office or house, it is possible to immediately move the note to a notebook or some such appropriate place. 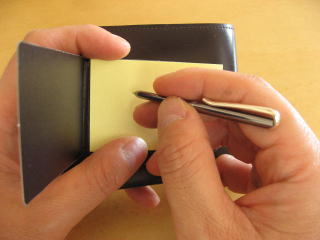 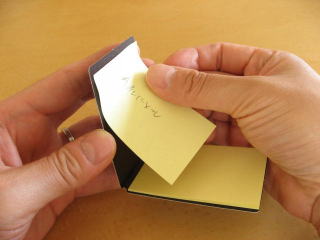 Leaving some jotting paper in your wallet is another way, but then the memo has to be transferred into the usual notebook by rewriting it or sticking it in with tape and this makes extra work.

If you use the Post-it Note type of paper, simply sticking into a notebook is all that has to be done and to be long lasting this easiness is an important point.


I think that hardly anyone ever goes out without a wallet and this way, each time you go out you no longer need to feel that you’ve got to get a pen and paper.


To know that you always have a pen and paper is the greatest peace of mind. 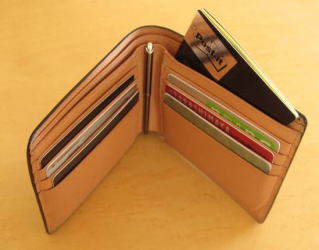