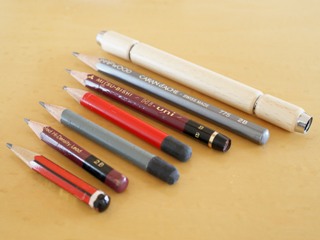 Multi-function pens, such as the Lamy 2000 Multi-colour ballpoint pen and so on, are where one pen can perform as a number of pens.


It isn’t necessary to have a lot of pens as the type of pen can be changed instantly when needed, making it very convenient.

Now, a tool that enables even pencils to enjoy this multi-functionality has been released.

Actually, come to think of it, there have been pencils with attached erasers since long ago.


These, too, could obviously be called multi-function pencils.


In this sense, it could be possible to say that pencils are the forebears of today’s multi-function pens.


It feels like this is coming into the market with the sense that these forebears aren’t going to be beaten by the younger generation yet.


What this is, is this wooden Twin Extender.


To those of us in the general public this may be a somewhat unfamiliar name.


Tokyo Slider Co. has a 40 year history as a stationery trader specialising in art and drafting supplies.


Although the main focus is on the wholesale business base, there are a number of other original products that they make including such things as attachable pen shafts as well as this twin extender.

In this extender two materials are used to make up its body. 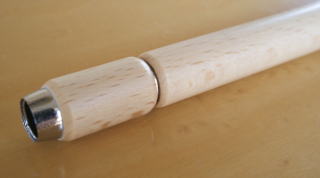 The inside is metal and the outside is wood.


Such supporting extenders are often made of metal but this has a wooden appearance so the likeness to a real pencil is nice.


It is of two layer construction, however, the wood has been laid thinly so, over all, it is not that thick.

Obviously it is a bit thicker than the pencils we usually use but, really, it can be gripped as normal.


Also, the extender itself is extremely lightweight.


When I actually tried weighing it, it was 9 grams. A new pencil is usually about 5 grams so call it about two pencils worth.


This means that even when a pencil is inserted there isn’t really an impression of heaviness.

The type I obtained is a natural wood but there is also a slightly darker brown colour too.


Because this extender is multifunctional it is made so that a pencil can be set in each end.

Pencils come in many types of hardness such as HB, B, 2B and so on. 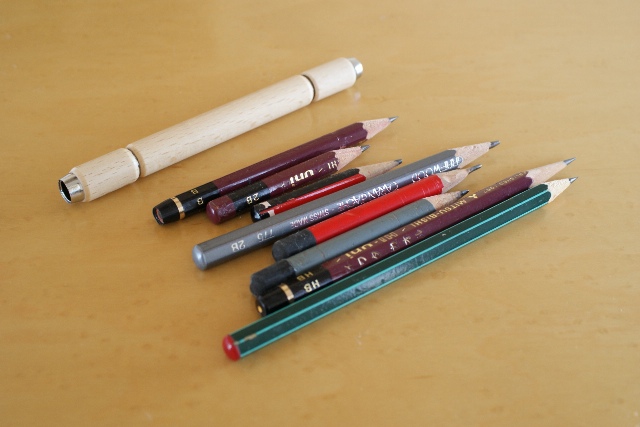 This allows you to choose from among these, two of your favourite pencils and set them in the extender to use. 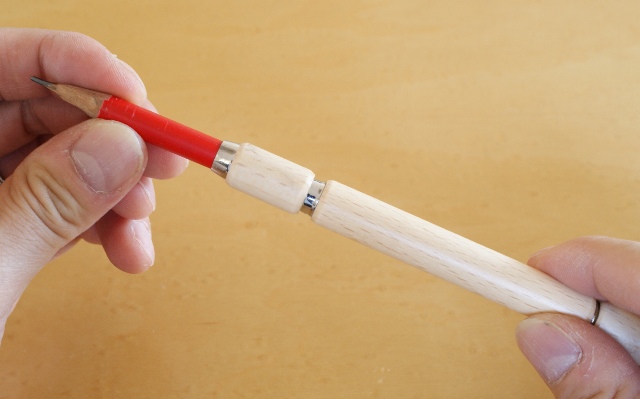 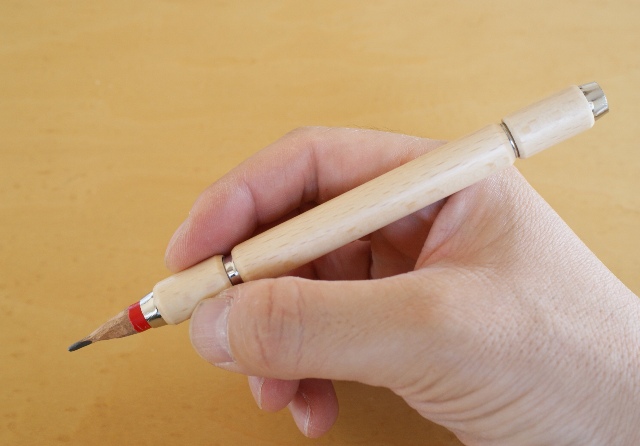 For example, this combination could be worth considering:

for general note taking a 2B on one side and then on the opposite end a softer 4B pencil for expressing ideas that you are formulating. 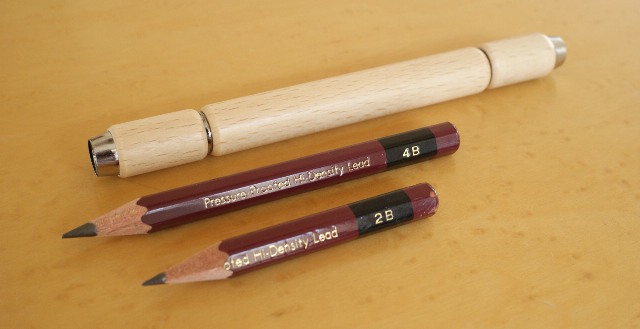 Changing the thickness and the sense of the softness of your handwriting according to the content of what you are writing is surprisingly effective. 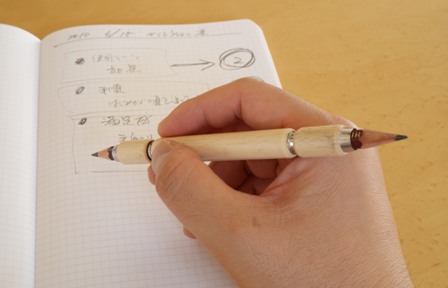 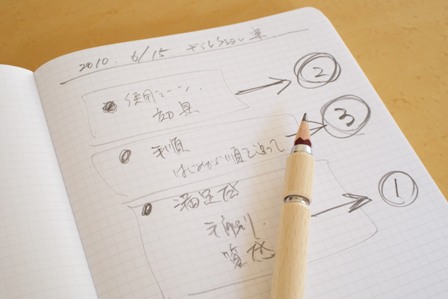 If you have a pencil that writes thickly, each character is naturally enlarged and, when writing keywords and the like they really stand out.


On the contrary, when we create a precisely detailed list, a pencil with a state of some hardness can be selected to satisfy the purpose.


Seeing that there are so many different types of hardness available in pencils, I think it would be quite interesting to make your own favourite combination.

In addition to combinations of mutually black lead pencils, it is also effective to set a black pencil with a red pencil just like a multi-function pen. 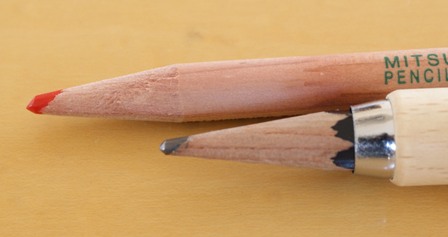 Moreover, setting a pencil with an eraser on the end is also an option. 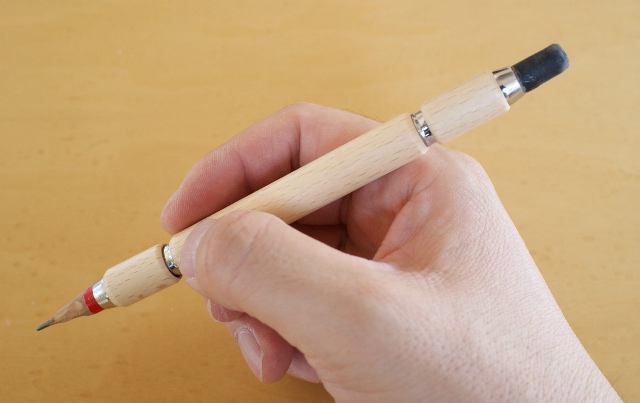 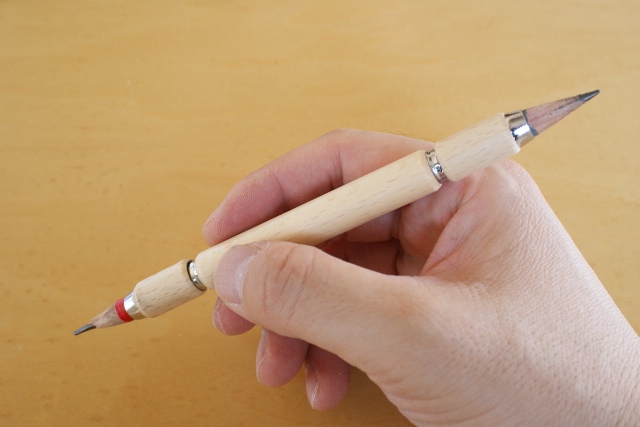 In this manner, it is possible to enjoy a range of multifunction options.


However, just because it can become multifunctional there is not necessarily any reason to have to use different pencils.


Setting two of the same pencil that you most commonly use is also a good option. 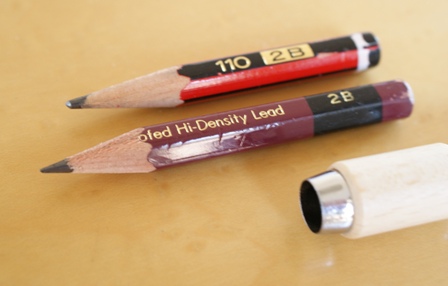 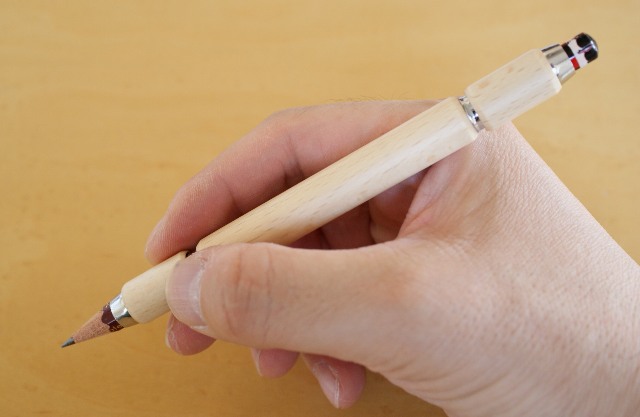 While continuously writing with one pencil the tip of the lead gradually becomes rounded.


When this happens, a new pencil can be taken from the other end to use.


This is useful at those times when you are on the go and can’t sharpen your pencil.


Originally, the main purpose of a supporting extender is definitely to use as an aid when a pencil is worn down so it can hardly write.

For this reason, in the supporting extenders available up until now, it wasn’t possible to set a long, brand new pencil.


However, with this Twin type it can be done.

This is because this Twin is hollow.

As shown, it is true that it is possible to set a new pencil.
Yet, isn’t doing this just the same as using the actual pencil in the first place?


This makes its role as a supporting extender somewhat unclear.


But no; just wait.
In this state, if you slide the extension just slightly towards the tip of the pencil-

although it becomes a little long ? to my surprise it is possible to cover the tip of the pencil’s lead.


That’s right. Another role of the extension, that mustn’t be forgotten, is the way it improves portability.


If the lead tip of a short pencil is put inside the interior of the extender, it is safe even if it is put, as it is, into a bag or a pocket. 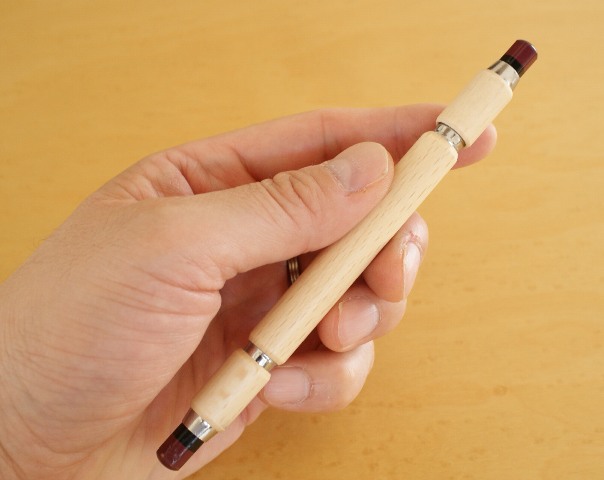 Generally it is possible to set both cylindrical and hexagonal pencils.


The length of the Twin Extender is 12.5 cm, so, if two pencils are set and each is around half the length of a new pencil it is just right.


In this way, this extender is something that lets you enjoy a large variety of pencil combinations. 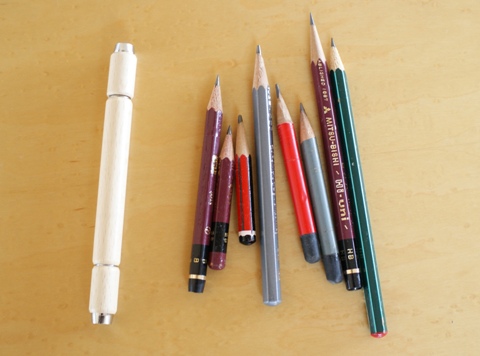