“It is possible to decrease the number of highlighters in the drawer”
Ink Charger (for highlighters) by Tombow Pencil Co., Ltd. 367 JPyen 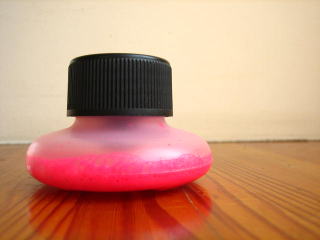 In my desk drawer, there are highlighters - to the extent that I could hold a‘take-as-much-as-you-can-grab’ tournament - filling it completely.

This is because even the ones that have become scratchy and are running out of colour are reverently kept.

Even if the colour has almost run out now, if it is just left to rest in the drawer for a little while, next time it is used just a little more might be possible; but the result of this faint hope - which has no basis at all - that just one more line might be drawn, is that it leads to lots of highlighters being amassed.

Those wishes, too, are in vain and even when you go to use it next time it won’t write but, for some reason, you can’t cry ‘For goodness sake!’ and, immediately, toss it away...

This Ink Charger is something that refills highlighters that have stopped working and brings them back to life again. 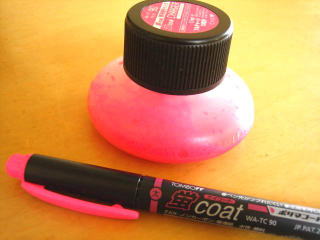 Now if you should have this, keeping lots of highlighters that are starting to get a bit dry isn’t necessary; just have one highlighter and, as long as you refill the ink, it will be fine.

With this, you can farewell a lot of highlighters in the drawer.

It seems that this Ink Charger was already in existence in 2003, but when I came to know about it was way after that, at the ISOT exhibition in 2005.
At the Tombow Pencil Company’s booth I came across an unfamiliar pen. It was a highlighter with a skeleton body and, without one drop of ink in the internal wadding strip, it was pure white.

Asking,‘Is this for sale?’, I was told‘This is for sale.’, and, what was tendered was this Ink Charger.

By force of circumstances, I couldn’t say ‘goodbye’ and so, then and there, it was demonstrated by that staff member.

The skeleton pen, that I had first been concerned about, was a demonstration highlighter to show the manner of the ink refill in a way that was clear and easy to understand.

The staff member, with the dispassion that comes from doing something familiar, inserted that pure white highlighter into the mouth of the bottle. This is to say, that this alone can refill the ink. 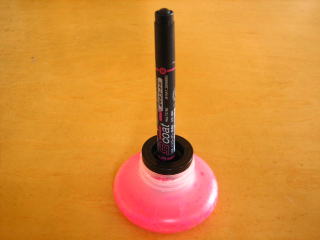 Apparently, the principle is that by using capillary phenomena, through the pen tip soaked in the ink in the bottle, the ink steadily soaks up inside the highlighter.

As I thought that two sensible adults silently watching the appearance of the absorption might be somewhat odd, I decided to attempt to ask a brief question.

“This ‘Ink Charger’ is for use in Tombow highlighters but, can you also use it with other companies products?”

Even if I do say so myself, I thought for something impromptu that was quite a sharp question.

That person, with a faint smile floating across their mouth, answered “Our company’s highlighter tips are guarded with a coat so that the pen tip doesn’t wear out but, with other companies’ products, there is the possibility that before doing the ink refill the pen tip has worn out”. 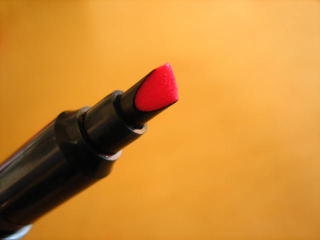 So I see, certainly the Tombow highlighters do have a polymer coat that protects the tip from wearing out. Without saying outright that other companies’ products couldn’t be used, casually the features of their own company’s products were woven in and for this excellent answer, in my mind, I gave this staff member a silent round of applause.

While going on in this way, the highlighter started to be tinged with a faint pink colour.

Certainly, to ascertain until the end wasn’t possible, so at that point I picked up the highlighter and wrote.

The tip of the pen held ample ink, more than at the time when the product is new, and was able to highlight clearly. 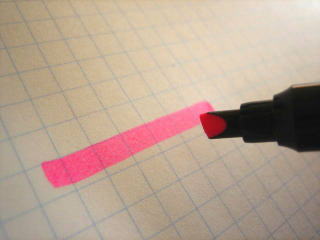 When I am hurrying, I dip the pen tip in the bottle only just a little and highlight and, if it is just some length, it is perfectly sufficient.

One bottle can actually do 10-pens-worth of refills.
Even so, however much the highlighter’s coat protects the pen tip, it is said that the same pen can be repeatedly refilled up to five times. 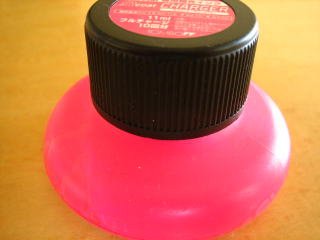 There is nothing more irritating than finding a highlighter won’t write when you had thought to use it when needed.

If you have this Ink Charger, even in such cases, it can be used instantly and, above all, disposing of the highlighters that have, up until now, been amassed in the drawer and clearing up is absolutely great.