‘A fountain pen for appreciating the beauty of Japanese writing’
The ‘PROFIT 21 Nashiji Naginata-togi’ Fountain Pen, by The Sailor Pen Company - \36,750. 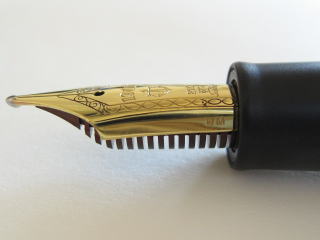 The writing instrument that most beautifully writes Japanese is, decidedly, a calligraphy brush.

While it cannot match the brush, there is a fountain pen that can write beautiful Japanese characters. It is the Sailor Naginata-Togi Fountain Pen.

Profit 21, Professional Gear - all the way to the large REALO - and so on.

From amongst these, at the end of much deliberation, this time I made the purchase of the ‘Profit 21 Nashiji’ type. 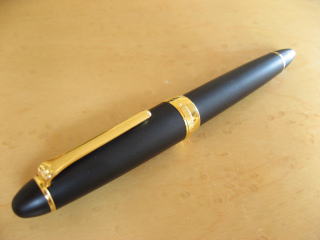 The‘Nashiji’type has a surface that is slightly rough, like the skin of the Japanese ‘nashi’ pear fruit.

The definite golden colour, that comes from 24 carat gold, is extremely beautiful. 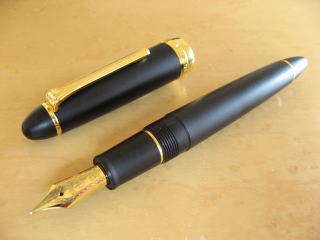 This gold colour goes beyond the pen nib, extending to include the clip, the ring around the centre of the body of the pen and, even reaches to the part that screws apart to replace the ink. 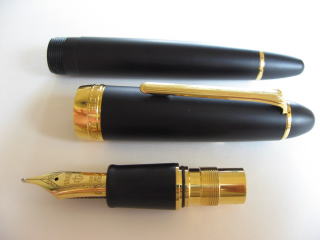 Against the matte nashiji lacquer of the body, how well the golden colour shines out... 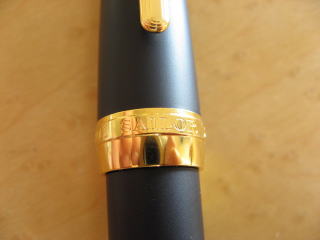 On the practical side, this nashiji lacquer has the advantage of your hand becoming accustomed to the comfortable grasp but, actually, there is one other big reason that led me to choose this nashiji lacquer. I heard, from a person at Sailor, that, even though this is a matte finish, with use, a very attractive luster will emerge.

For the user, having one’s own tools gradually become things of deep character is a thing of great joy.

Already I am full of anticipation as to what kind of character will emerge.

In relation to this pen’s body, there is just one more thing that I want to touch on. That is the feeling when opening and closing the cap.

Here there is a degree of smoothness that hasn’t been experienced until just now.
With an ordinary screw-type cap, just at the point when it opens, there is a ‘click’ sound as it slides apart, however, this cap, remaining almost silent, smoothly disconnects.

The feeling of pressure, too, is not of a sudden looseness, but rather a feeling of it gradually becoming looser.

Of course, it is the same when closing the cap too.

That is probably enough said about the body, and it is time to move onto the main subject of the Naginata-togi, which, in Japanese, is the name of a Samurai long sword.

As the name implies, the nib of the pen is sharpened lengthwise. 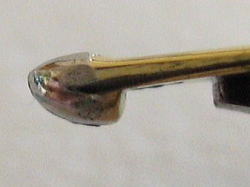 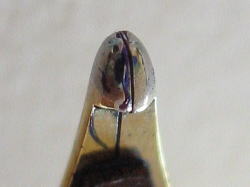 Due to the shape of this nib, if the pen is run upright the line is fine, but, 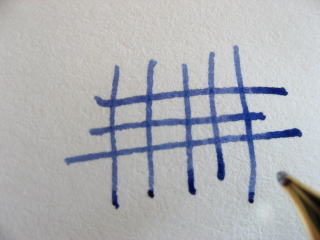 then, if you write with the pen held flat, it is possible to produce somewhat thick handwriting.

This variation is not a dramatic difference, like in calligraphy, but is a persistently natural difference. However, after continuing to always write with the Naginata-togi sharpness, when swapping over to an ordinary fountain pen, the line written with a cross stroke definitely seemed very thin. 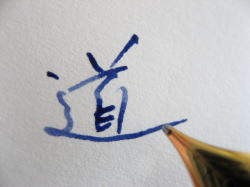 The effective use of this discrepancy between the vertical and horizontal line width, imbues handwriting with strength and makes it possible to create richly expressive letters.

It is said that it becomes possible to reach the point of being able to replicate the brushstrokes of Japanese calligraphy.

According to Mr Yukio Nagahara, who made the modification to the pen nib this time, this lengthwise sharpening technique was often seen in the past.

Apparently, in the rush to the era of mass production, gradually
this kind of hand-sharpened pen nib disappeared.

The Naginata-togi, it seems, can be said to be one of original Japanese fountain pen shapes.

I obtained an ‘M’ (middle sized nib) and in terms of the feel of the writing it has a wider surface touching the paper than a general pen nib and really overflows with smoothness. 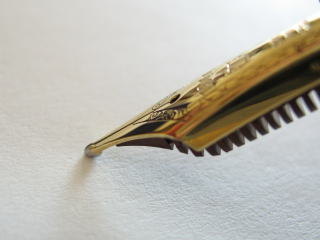 If permitted by time and paper, I start to feel like I want to keep writing forever without stopping.

Having this Naganata-togi in hand, I anticipated that, immediately, as if by magic, I too, would be able to write beautiful letters with effective calligraphy strokes but, it wasn’t that easy.

This is probably an effect of my writing not being very neat.

However, in the midst of repeated trial and error, I became aware of something.

I imagine that this is a strange way of saying it, but the thing is, not to try to write well. When releasing the pressure in my shoulders and then trying to write, it became possible to write with very natural handwriting .

Somehow or another, by writing without putting too much strength into each stroke, the difference in the heaviness and lightness of the downstroke and cross-stroke lines comes out more clearly.

The pleasure in which you are immersed when writing with a fountain pen comes from the quality of the feel of the writing but, at the same time, the beauty of the letters you have written is also an important point.

I think that this Naginata-togi is something that lets you experience both of these pleasures.