Making a pen holder for a Rhodia 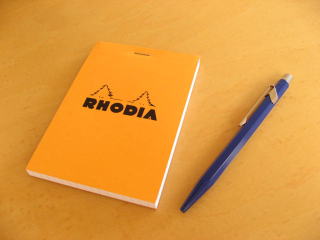 Amongst designer stationery, Rhodia is revered as the leader of the pack.
So far, I too have enjoyed many volumes.


For the popular Rhodia, many manufactures have put out cases.

Yet, up until now I have never used any such thing.


This is because I wanted to relish the distinctive Rhodia orange cover just as it is.

However, the fact is that sometimes the cases do have pen holders. This is something that a Rhodia by itself could never have and for which I felt extremely envious.

While wishing that it was possible to enjoy the orange cover of the Rhodia just as it is and also attach a pen, I thought of a way to do it.

It is a way of using the Rhodia itself to create a pen holder.

This is not about attaching something to the Rhodia, but ultimately a way to create a pen holder by capitalising on some features that are already inherently part of the Rhodia.

The appearance, however, might leave a little to be desired...

Preparation requires a No. 12 Rhodia, as well as a one-hole punch, some tape and, that’s it.

Firstly, on the top right-hand corner of the cover stick on tape as if to wrap both sides of the cover. Any sort of tape can be used but I use tape that is about the size of wide packing tape. 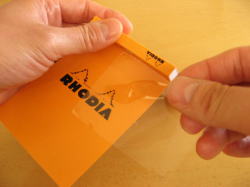 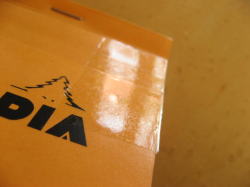 On the Rhodia’s front cover, three lines have been scored so that when the cover is folded back it is neatly positioned.

In between the very top scored line and the second scored line, use the one-hole punch to make one hole. 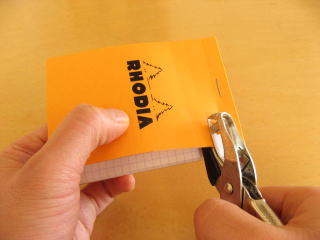 At this point make the hole as close as possible to the second score line. This type of precision cannot easily be achieved except with a one-hole punch.
Now it’s all done. 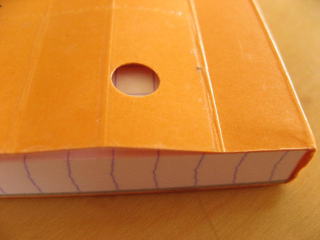 At this point of time I am sure that most people have already worked out how the pen will be attached. 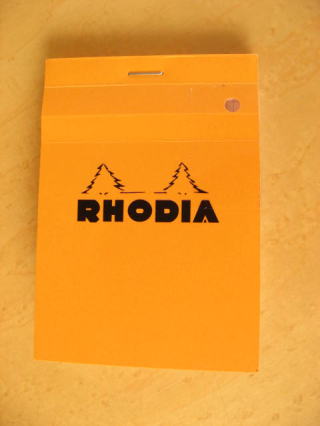 Yes, just as everyone has guessed, you simply slip the clip of the pen into the hole.

But, even with a hole having been opened, perhaps you might think that a pen can hardly be attached to something that is so flat.

I’m most impressed that you asked me the right question. (Well, no one has actually asked it, but, all the same...)

As already mentioned above, crease lines are scored into the Rhodia’s front cover for the purpose of folding it back.

These are going to be utilised.

Hold the front cover with your thumb and keep that position while sliding the surface of the cover upwards. 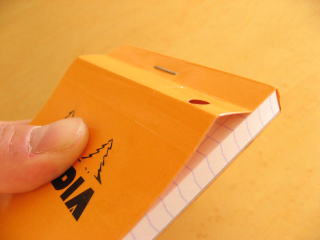 Hereupon, the hole that has up until now been level, rises up in a three dimensional fashion. 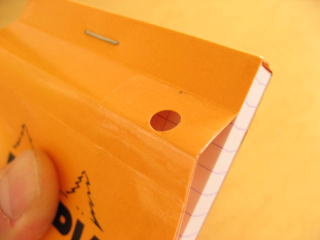 By doing this, a pen clip can be attached easily. 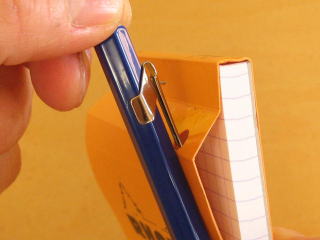 Earlier on, at the time of explaining how to make the hole, the reason it was emphasised that the hole should be made as close as possible to the second score line was so that, when raised like this, the hole forms an opening at the peak of the crease.

In this way, it becomes very easy to attach a pen. 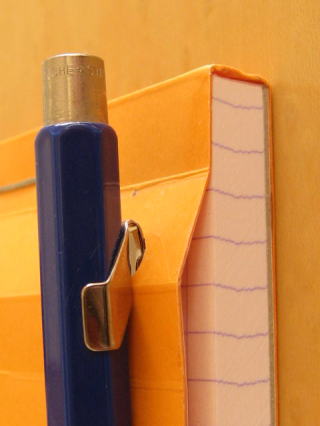 To this ‘Rhodia with a hole’, I attach the Caran d’Ache Office Ballpoint pen or the Parker Jotter. The No. 12 size Rhodia is highly compatible with these short length pens which extend beyond the Rhodia to just a slight degree when it is all put together. 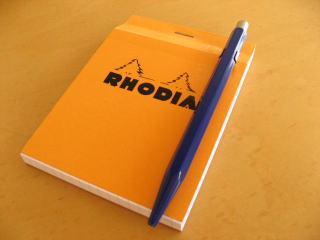 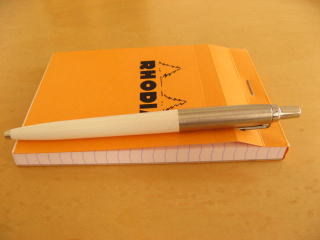 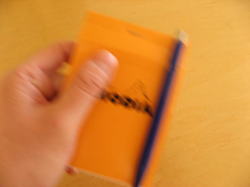 As for the way the pen attachment feels, although I haven’t asked the pen, it seems quite firm and I have the sense that it is secure.

Incidentally, it is not that a pen like the Lamy 2000 4-Colour Ballpoint pen can’t be attached but, in this case, the extent to which part of the pen juts out from the pad gets a little longer. 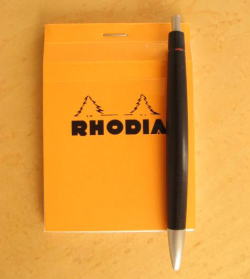 With this method, when all is said and done, the only concern is making a hole in the front cover which is the face of the Rhodia.

This, I must honestly admit, is certainly of concern.

Yet, in practice, when used as a note pad the front cover is folded back so this cause for concern is somewhat alleviated. 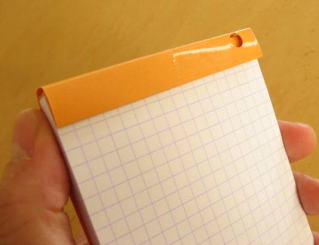 When the front cover is closed, the only solution is to use it in such a way that a pen is clipped on without a moment’s delay.

Ultimately, to start with, I think the method described here has come about by very reason of the sturdiness of the Rhodia’s front cover.

However, if a pen is repeatedly attached and removed the hole will, as a matter of course, become worn. Wrapping it in tape is for its reinforcement.

I am using this ‘Rhodia with a hole style’ pad with a pen attached, by putting it in a pocket or a bag.

Especially at those times when you are in a hurry and so forth, having pen and paper together is extremely helpful.

Leaving aside the appearance, this ticks the box for attaching a pen to a Rhodia notebook just as it is. 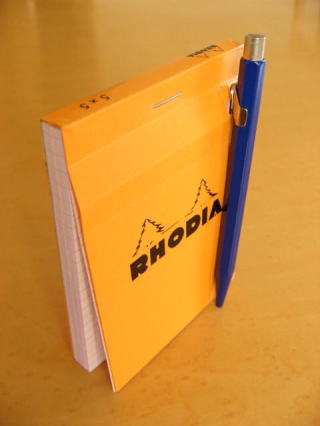