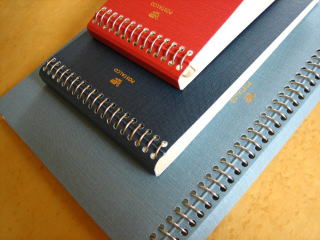 The Postalco name is a combination of ‘postal’, as in the mail service, and ‘company’.

The post carries letters all over the world.
Although it tends to be hidden in the shadows of email and the internet, even now, as a mechanism that transports all around the world, I still think it is incredible.

Postalco manufactures with the concept that all sorts of paper, including these letters, can be carried comfortably.


The pigeon trademark is a carrier pigeon, the symbol of the carriage of mail. 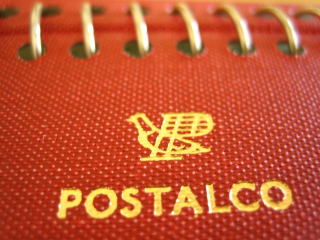 This time I want to introduce the original notebook that is made by Postalco that puts such deep consideration into paper.


Firstly, let’s start from a look at the outward appearance.

Touch the cover and it is a little rough. 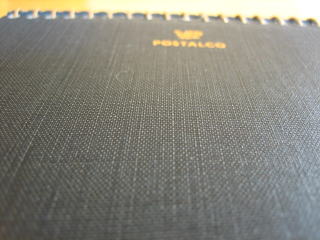 A material called pressed cotton is used here. Although having said that it is pressed cotton it might, perhaps, be hard to imagine but it is the material used in tents. Still, even having said this, probably most people haven’t touched something like a tent. In short, it is probably enough to understand that it is cotton woven so tightly that, like a tent, it repels rain and dew.

Because this pressed cotton is pasted on the cardboard cover it is quite stiff and has sturdiness.
This is the part that is always in contact with the hands and also has the role of protecting the paper inside so this kind of solidity gives greater peace of mind.

Pressed cotton is, after all, a fabric so over a period of long use it is said that the texture will develop a rich character. I am already impatient to know what character will emerge.


This notebook is spiral-bound.

When a spiral notebook is put on a bookshelf after you have finished using it, all that can be seen along the spine is the ring. In short, there is a weakness in it being difficult to label.

But this spiral notebook is properly equipped with a spine. 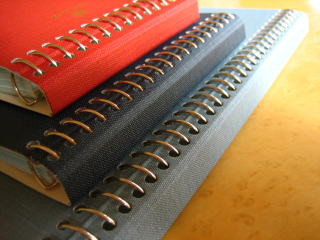 The front cover, spine and back cover are all catered for with the one piece of cardboard.


It has this type of integrated cover but the feel of turning the page is the same distinct smoothness that is only found in spiral notebooks.

In addition to this, in this integrated cover another really wonderful contrivance is concealed.

Let’s assume that you are holding a spiral-bound memo pad in your hand and writing.

At first the memo pad will provide support for the hand holding the pen, however, gradually while moving downwards towards the bottom of the page, you will be compelled in the end to write without any support for your hand. Having lost support for your hand, the situation is such that the tip of the pen only barely manages to stay on the paper.

Even to put the tip of a pen in one spot takes the utmost effort and, moreover, in this state the intention is to write letters so, inevitably, the letters become indecipherable.

Try turning the cover over to the back of the notebook and it protrudes by a little more than 3cm from the bottom of the pages. 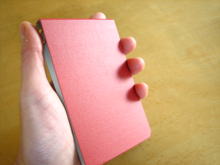 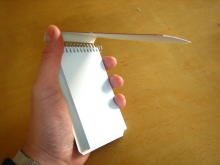 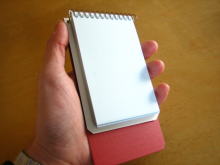 If this is used as a support it means that it is possible to write comfortably right to the very end of the page.

This must be good news for a person who usually spends a lot of time writing things down while standing up. 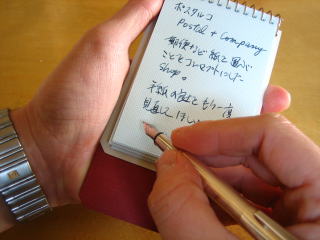 Because of this, it doesn’t become a hindrance when put habitually in a pocket or bag.
This certainly puts Postalco’s idea of “carrying paper comfortably” into practice.


When the cover is opened a blue grid is laid out. 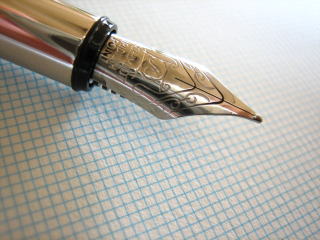 The tiny grid design constructed by blue ruled lines almost seems to appear to be a pale blue page rather than a grid.

Even though there is this 1mm grid, it is not used by writing with each square but, and here audaciously, I use it freely with a sense of it being just like a blue unlined notebook.


In the case of drawing simple diagrams and the like, the grid is good to use to draw the lines.

The extreme cases of writing roughly at times then with precision at other times are made possible with this 1mm grid.


Due to the paper having thickness and plenty of firmness, when used with either a fountain pen or aqueous ball pen it didn’t show any page bleed through or feathering.

However, I was a little concerned that the blue ruled lines somewhat repelled fountain pen ink.

In a trial with the manufacturer’s fountain pen ink for Montblanc, Pelikan and Lamy the Montblanc and Pelikan were alright but it seemed that it slightly repelled the Lamy ink. 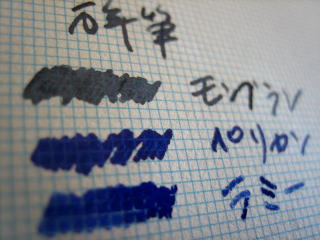 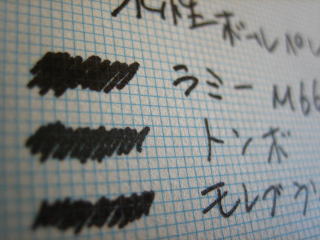 Even so, it is not to an extent of any concern for writing words normally. For those people who really can’t help but be bothered by this, there is also an unlined type available so choosing that is an option.

In one sense such things as notebooks have already been perfected but this is something that gives us a reminder that there is still room for various sorts of ingenuity. 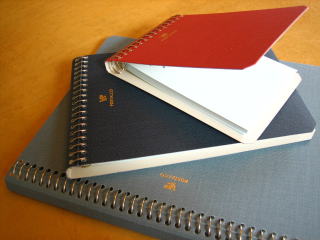