‘Namiki’ is the brand name for Pilot’s high-end export line of writing instruments. One of the products among this line is the ‘Falcon’ fountain pen.
This was originally sold in Japan under the name ‘Pilot ELABO’. The story is that at that time, the pen was created through a process of joint development between Japan’s national fountain pen speciality store association and Pilot.

ELABO is definitely a unique name. The meaning, however, apparently combines the Japanese word ‘erabou’meaning choose, as in: ‘choose this fountain pen,’and the English word,‘elaborate’.

The ELABO is now no longer sold in Japan, however, overseas, with the name Namiki Falcon, it is still available. In a word, this is the export label for the ELABO.

The Falcon’s most outstanding characteristic is the shape of the nib.

From halfway along, the nib gently slopes upward; just like rising up a step. 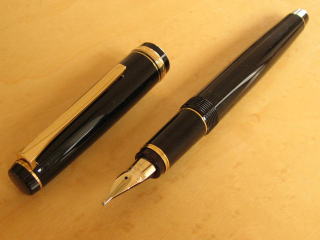 Falcons are birds such as a hawks; so I see, the style is like the brave look of the falcon from its beak to its head. 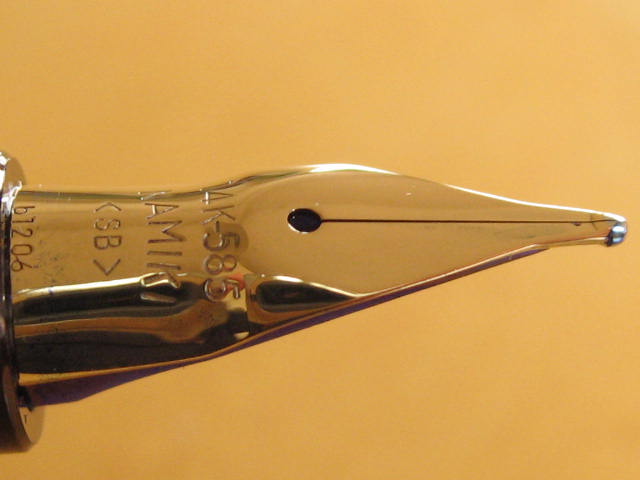 On the nib, the ‘Namiki’ engraving shines brilliantly.

Except this, nothing else but the bare minimum necessary information, such as 14K, has been engraved; particularly fancy decorations have not been done.

As a result of losing unnecessary engravings, this smooth step gains much more emphasis.

While I don’t imagine a nib is something often touched, with this smoothness before me, I couldn’t resist touching it.

Every bit as smooth as it looks, it really has a nice feel.

This time I chose to try the ‘SB’, that is to say a‘soft broad’ stroke.

Well, lets attempt to be satisfied regarding the softness. 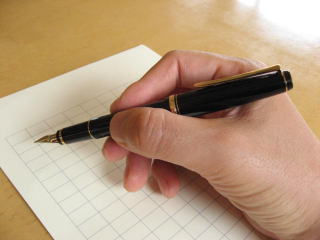 I don’t write with particularly heavy pressure but, even so, I could fully feel the softness. 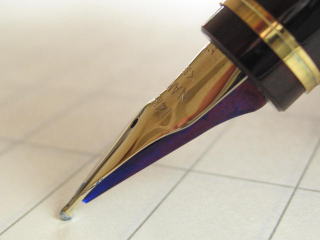 If I were to describe the impression in one phrase I would say it felt ‘moderately soft’.

It doesn’t yield overwhelmingly, but there is an appropriate softness.

While the base of the nib is in the usual style, part way along the nib suddenly steps upward. Only the part with this‘step’ is able to pleasantly yield. 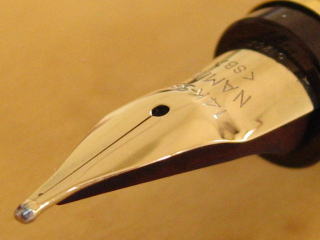 Even with light pressure you can enjoy this pliability.
Then, if you apply firm pressure to write, it answers with an appropriate softness.

The writing feels as if it is comprehending the writer’s mind.

The sense of writing remains lingering. 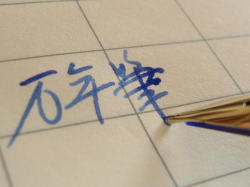 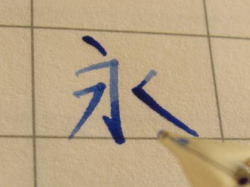 Although I am still not masterful, it seems that when it becomes possible to manipulate this pliability with the addition and subtraction of pressure, I would be able to write beautiful Japanese characters with the fine brushstrokes of calligraphy.

The flow of ink is, also, extremely good.

Looking at the pen from the side, in comparison to the way the nib rises, the core of the pen is basically flat except for in only one place where there is an angle. I think that, surely here, the ink is waiting impatiently, asking,‘Now?’, ‘Now?’, for its turn. Start writing and, as it has always been waiting, the ink rushes out.

Particularly with the Broad ‘B’type that I am using, the ink quite markedly decreases. 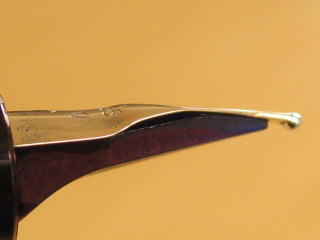 Often I have felt a sense of favouritism towards a newly purchased fountain pen, compared to the one I had been using until then, so I carelessly tend to use only the new one. However, with this Falcon, even though that ‘new’ feeling has been depleted, for me there is a sense of suddenly having accomplished a higher level ranking.

On the body of the pen there is only one thing that I want to mention, and that is the clip.

When it comes to Pilot, that clip that is a perfectly-round ball is a trade mark, but, this time, on this product, there is nothing like that and the style is refreshingly simple.

If you look at the clip from the side it is gently curved, just like a sword.

Try slipping it onto a pocket and this curve, specifically the clip opening, is somewhat wider than usual so attaching and removing can be done very smoothly. 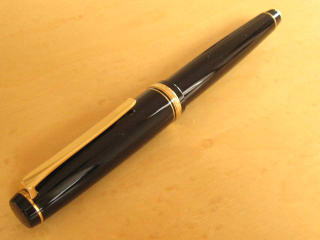