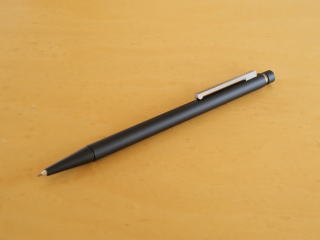 All Lamy’s pens are designed based on the philosophy of “Bauhaus”.

Given this, if I am asked ‘what is the most Bauhaus-like pen of them all’, quite a few pens come to my mind, however, to me a pen that is recently steadily increasing its presence is the pen called CP 1.

Anything unrelated to functionality has been eliminated. Through the process of elimination each substantial part that is revealed can, one by one, be examined all the more closely and this solidity is shown in the entirety of this CP 1 pen.

I personally feel that this chiseled down solidity exceeds that of the Lamy 2000.

Among the designs by Mr Geld Alfred Muller, Lamy 2000 stands out and the CP 1 is hidden by its shadow.

I have just discovered its attraction at last.

This time, I would like to explore all the various details of the CP 1 using the pencil as a base.

Although it has a simple body, this is a pen that is really worth exploring.

I used the word “explore” because I dare say that, when I write about the details of a pen in a column like this, the image I have is one of myself becoming like a tiny dwarf and I feel like I go on an exploration, climbing up and down the pens.

The thing I feel is most Bauhaus-like, is that the entire body is constructed in a very simple shape.

Firstly, the body is completely a cylindrical style.

From the grip to just below the push button, the thickness of the shaft remains the same.

Some may say, ‘Isn’t it just the same as any ordinary pen?’ but some pens have an easy-to-hold effect at the grips or are made so that, even though it looks like a cylinder, the grip part alone is a little thicker.

To best way to fully appreciate the cylindricalness of the CP 1, is to dismantle the pen.

By doing this, its style becomes a complete tube. 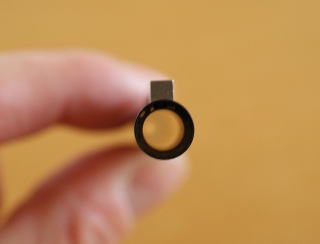 The Lamy 2000 also has this kind of a matt black body but when lined up next to each other they look quite different. 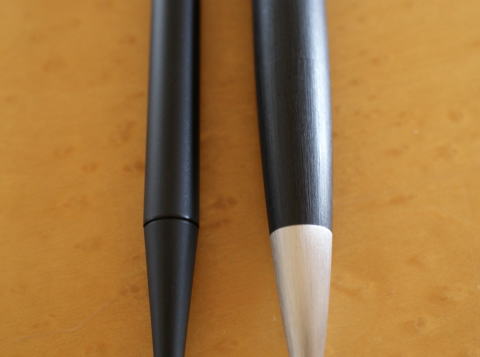 When it comes to the way they feel to the touch, they are completely different.

Basically, they have the same rough surface but CP 1 feels subtly smoother.

Next, the exploring team (although, actually, I am alone) will advance forward to the push button.

Here the perfectly flat body suddenly sinks down and I come across a place like a small dent. 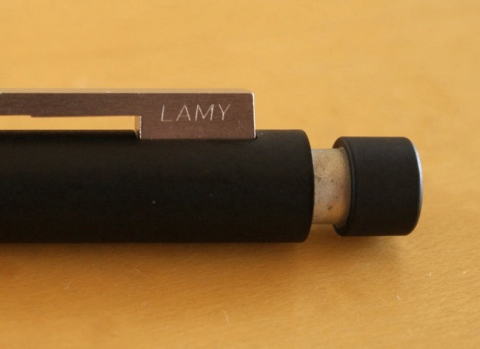 This is a slot for an allowance component of the push button.

It has to be said that it looks pretty cool.

It is a metal part of silver matt finish but the way it feels to the touch is totally different from the matt finish of an artificial material. 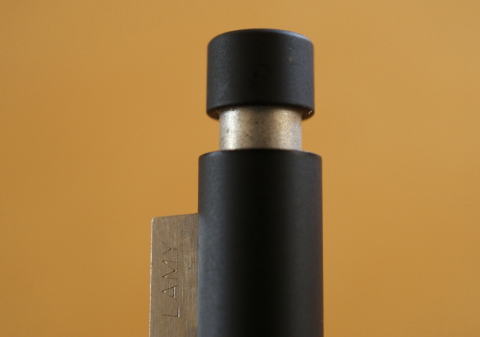 It is finished with the roughness that is naturally inherent in this material. 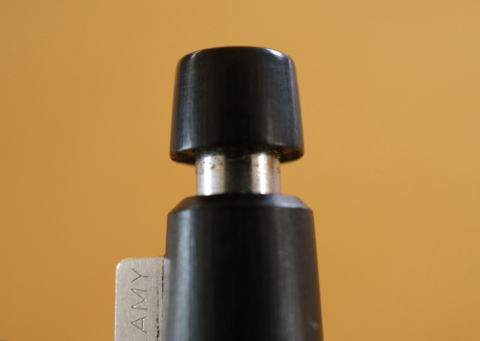 This is in contrast to this same part on the Lamy 2000 which has a slightly polished finish.

If you take out each push button and line them up side by side this is really obvious. 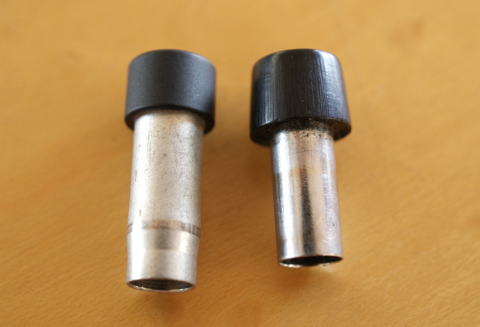 When I see the matt finish of natural silver color on the CP 1 I am reminded of a traditional ‘tool’.

It feels as if the air of 1974, when this pen was first made, still remains.

Above the silver slot allowance component there is the button to be pressed by the finger.

If you look at it very closely, you will find that the diameter of this button is just a little bit smaller than that of the body.

This is something that is also seen on the Lamy 2000 pencil.

If the diameter was the same there would be an imbalance with the head appearing too heavy, I presume.

This button also looks good when viewed from above. 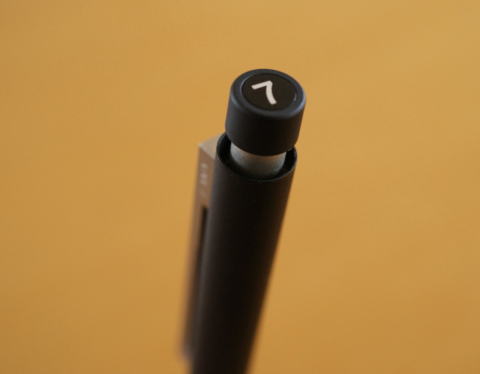 The opening of the cylindrical body looks like the crater of a volcano and the push button emerges from its center.

Furthermore, the bottom of the push button cannot be seen as it is engulfed in the darkness which gives the impression of a bottomless depth.

A hard, stiff sound, characteristic of the movement of metal parts, is generated. 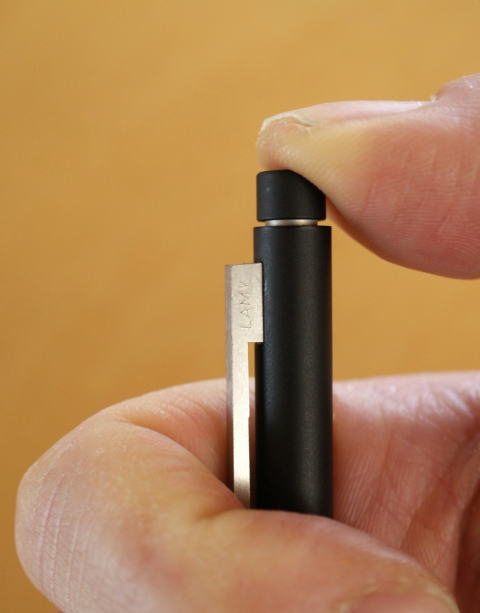 Here you will observe that when the push button is compressed the slot allowance component does not completely disappear.

There remains a gap of around a little less than 1mm. 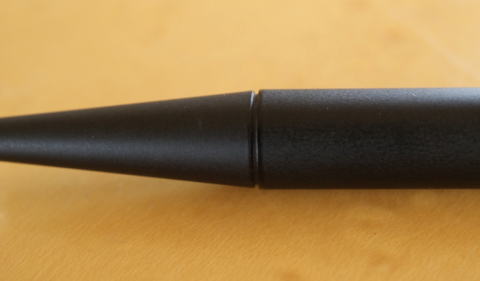 As if rhythmically perfectly attuned, these two gaps are exactly the same. 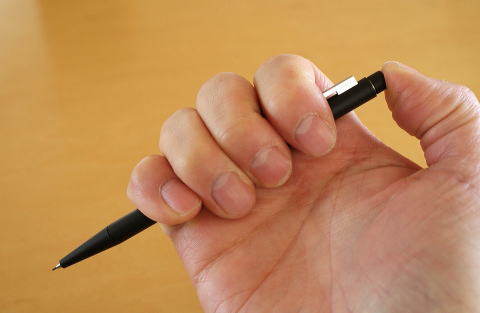 Incidentally, with Lamy 2000 pencils, when you compress the push button the slot allowance component is completely hidden and, there is no gap between the nib and the body like the CP 1 either.

Next I would like to move onto the clip.

It is the solid stainless clip that was adopted for the Lamy 2000.

Although it appears the same, the details are rather different.

Firstly, when looked at from above, the Lamy 2000 has an upside down trapezium shape but the CP 1 is completely rectangular. 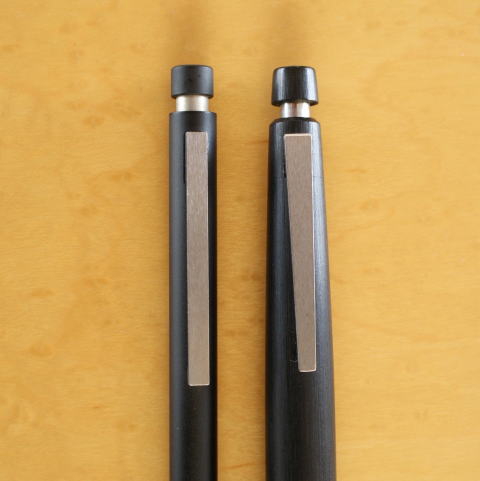 When viewed from the side, also, the CP 1 has a wider foot and the edge has a slightly different make. 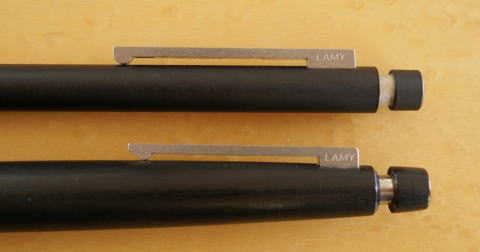 The sense that I get from the clip is that basically it is all composed of squares and circles.

The angle of the base of the clip is slightly wider than a right angle but the rest is all just squares and circles.

Although I intended to write this in closing, I will mention it now as it seems to be the right timing.

If you look at the simple body of the CP 1 carefully again, the nib has a circle and a trapezium, the body – because it is cylindrical – has lines and circles and, the grip has only squares and circles. Therefore, it basically consists of only squares, circles and straight lines.

This is exactly the reason for putting ‘circles and squares’ in the title as it has been made with these ultimately simple shapes.

Nevertheless, to say that the design is simply one of arranging these two simple shapes like toy building blocks, is certainly not the case.

There is something like a thread of beauty that stretches through the entire body.

It is this point, I feel, that is most Bauhaus-like.

With regards to the clip, there is one more thing that I would like to add.

The clip of the CP 1 is also a spring system.

Usually, with these spring clip systems, when the base is depressed it feels like a spring is activated, however, on the CP 1 this is not conveyed only by the sense of touch but also visually.

If you remove the push button and the eraser and look just below the clip, you will see, very slightly, the spring. 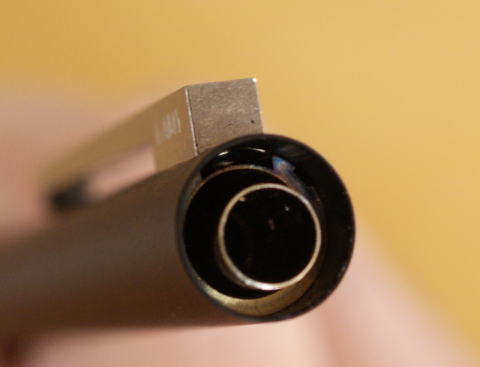 When the base of the clip is pushed down the spring lowers.

Now, a look at the way it feels to write with.

Gripping the pen, the foremost impression is that the shaft is slim. 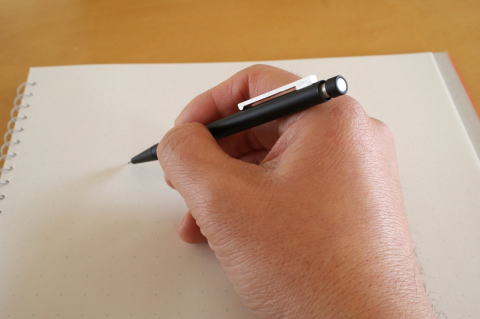 This may be because I have become used to gripping the slightly thick body of the Lamy 2000.

The diameter of the shaft of the CP 1 is about 8mm.

The diameter of the round lead of the pencil is 7.5mm so, actually, it is just a tiny bit thicker, but the impression is strangely one of being slim.

There is a reason for this slenderness according to the book, “All About Lamy”, the CP 1 was apparently originally made for women.

From the long trapezium that is the pen’s tip, (strictly speaking a truncated cone) a silver nib extends only slightly.

Personally, this part was a bit disturbing.

The reason for this is that where the black part meets the silver part there is a rather pronounced step.

I thought that this could have been made more natural.

It seems that this silver part is a common component with the Lamy 2000 pencil and it may be influenced by this. 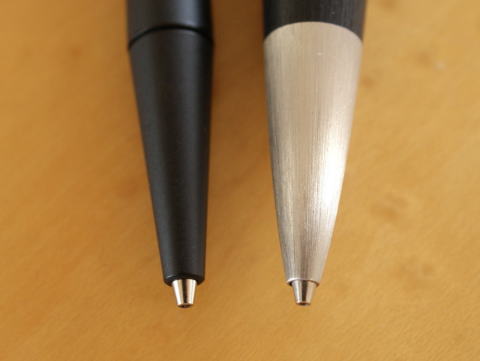 In order to compensate for this, I always click the push button 3 times to make the lead longer than usual.

As the lead extends more it becomes easier to break, however, this lead is 0.7mm thick and my writing pressure is not so strong so it is alright.

Here, I have completed nearly the entire exploration of the CP 1.

I don’t feel comfortable with the word “simple” to fully describe this pen.

So what word is appropriate? I cannot think of the right word.

I dare say it could be “well balanced”.

I feel that if I try to write more than that I will simply get further from it.

At any rate, I am very happy that this pen can be purchased as a current product even now.