“An emergency memo with an affinity to fountain pens”, DESIGNPHIL CARD MEMO 126 Yen 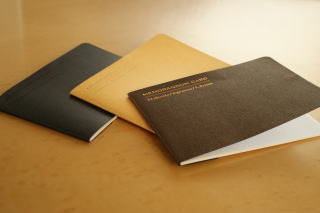 An emergency is a situation of urgency. As, in the first place, memos are something pulled out and written on in a moment of necessity, all memo pads can be regarded as emergency items.

Nevertheless, and this could just be the case for me personally, but it is at those times that is it really needed that I have forgotten to carry a memo pad. This is an actual state of emergency.

At these times what saves me is a small, portable “emergency memo”.

For this emergency memo I use the STYLE CARD NOTE of POST-IT by Sumitomo 3M, that I have introduced previously.

This has nearly the same dimensions as a credit card, so it is just right to keep in a wallet.

If you leave it in the wallet that you always carry, the need to worry each time about not forgetting to take a memo pad is alleviated.

An item which I would like to include in this “emergency memo” group has just been released for sale.

This is a card memo from DESIGNPHIL. 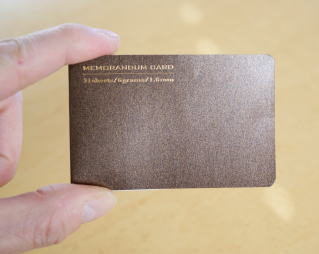 As the name suggests, the size is practically the same as that of a credit card.

It is not only the size; the right corners, which open the pages, have a rounded finish also like a credit card.

For the cover, which I guess is made of paper, something shiny and silky to touch has been used.

Though small, the look is refined.

Looked at from the side it is extremely slim.

According to the instructions in the package, the thickness is 1.6mm.

This is apparently equivalent to the thickness of two credit cards.
It is an optimal thickness for putting it in a wallet.

The main items in a wallet are currency notes and credit cards.

In a way, a memo is a kind of trespasser in a wallet and basically has to conceal its presence.
The slimness of this memo shows it has a proper understanding that this is the position it is in.

In the first place, in order to make a memo thinner the simplest way is to decrease the number of its pages.

However, if the pages are too few you could be in trouble in an emergency.

This memo is filled with 31 pages.

It is sensible that there are 31 pages instead of 30 pages.

According to the instructions, there is a page for 31 days in a month.

For a person like me who will use this as an emergency memo, an emergency every day of the month is something beyond my control, however, the volume of the memo pad is satisfactory.

Now then, let’s look into the paper which is the key to this memo’s slimness.

A very thin paper called Typewriter Paper is used for this memo.

Pinching it between the thumb and finger while turning the page, you can feel the paper. 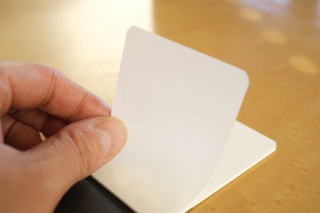 It is light and it feels very soft.

Held towards the light it has a transparency that makes it half see-through. 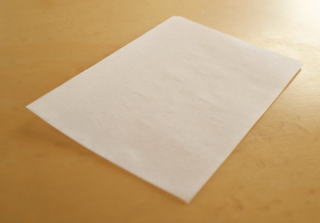 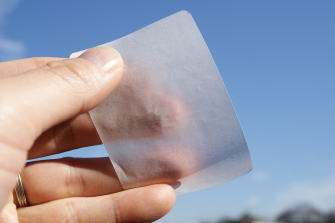 It is like the oil absorbent paper used in women’s cosmetics.

Put another way, it is also like tracing paper with the sturdiness removed

It is said that the whole memo pad weighs only 6 grams.

According to the instructions, the transparency and weight may vary according to discrepancies in the manufacturing process.

This suggests that it is an intricate manufacturing process.

The standard of industrially manufactured goods is that, whichever you buy, they are all the same.

While on the one hand, this provides a sense of security, on the other hand there is sense that it makes things somewhat lacking in character.

With fountain pen nibs, even when the model number is the same, each has a subtle individual difference.

These days, items which allow you to experience this sort of idiosyncrasy are becoming remarkably few.

This difference in thickness and weight according to the production lot is something I personally think is a very welcome thing.

At first glance this paper looks soft and very flimsy but, as a matter of fact, despite its appearance it has an indomitable aspect.

This paper allegedly has an affinity with fountain pens.

Accordingly, to prepare for such a situation, I tried out the way it feels to write with a fountain pen on this paper.

In a trial with a Pelican M800 thick nib, writing certainly felt good.

The softness of each page of this paper when layered 31 times generates an even denser softness.

Running the nib of the fountain pen slowly over this gives a feeling of comfort like that of being enveloped by a high quality cushion. 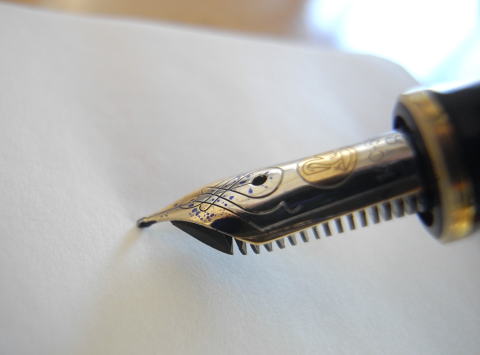 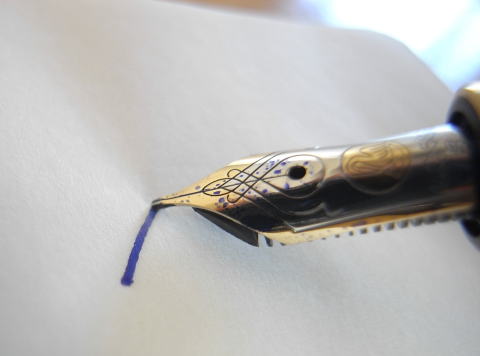 The ink does not smudge and the natural thickness of the pen’s strokes can be drawn. 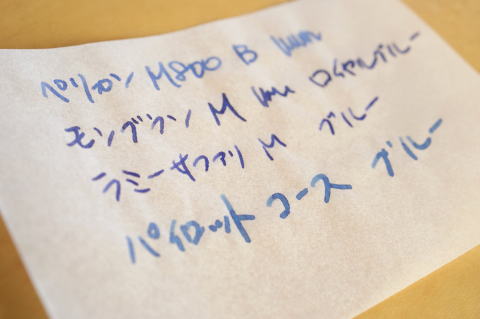 It also seems that the ink dries out faster than on ordinary paper. All the more should it be an emergency situation, I am pleased that the ink will dry instantaneously.

Looking at the reverse side of the page, the letters that you just wrote, from behind, appear to float as if they were written on frosted glass. 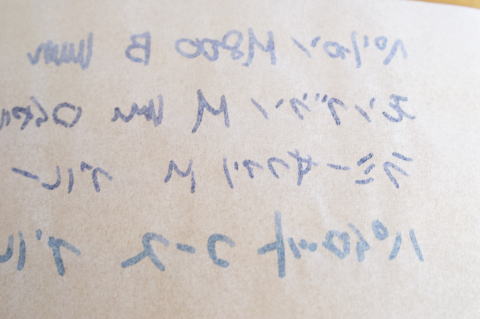 It is transparent, however, the ink has not gone through the paper.

In short, there is no permeation.

I tried all my fountain pens with their genuine inks and generally the result was good with only the subtlest permeation by a blue Mont Blanc ink.

This is why I said that, although it is thin, it is indomitable.

I even tried writing on the reverse side of the paper but the feel of the paper and the writing performance were mostly the same as on the face of the page.

It seems that there is no front or back side of this paper.

What is more, on this paper the writing performance of pencils is also good.

As pencils can write on most paper usually we are not very sensitive to their writing performance; but this is great.

The surface of the paper has slight tufts and the lead of the pencil nicely fixes into this unevenness.

This is paper that lets us feel that we are writing with a pencil. 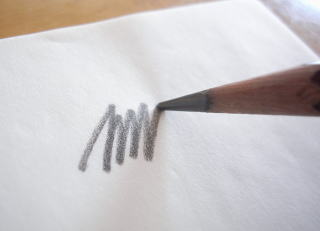 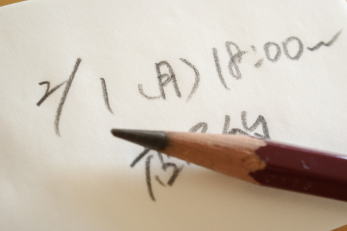 As this is an “emergency memo” it will usually be kept in a wallet.

Being the size of a credit card it can be put either in the wallet’s card pockets, or, in the billfold section. 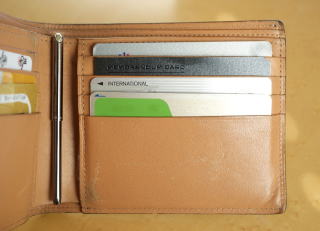 If it is put in the card pockets, the words “Memorandum Card” will show. 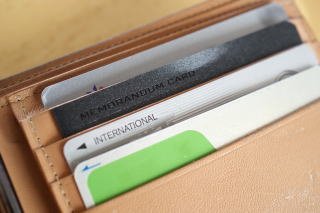 Not only can it be kept in a wallet; it can also be put in a business card holder. 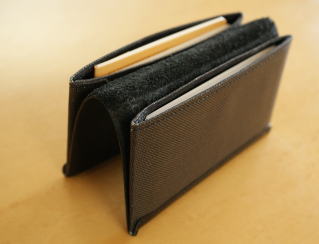 It fits so nicely you could inadvertently forget putting it there.

In an actual emergency situation, you can even write comfortably while standing because there is a rather thick cardboard mount at the back. 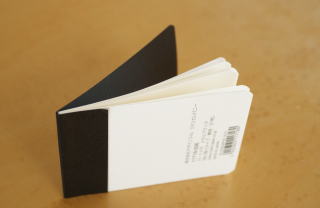 Each page is bound in with glue like a letter pad and, after writing each memo the pages can be peeled out neatly.

This written memo can be stuck into a notebook or, alternatively, it can be handed to someone, just as it is, as a memo.

I have actually tried using this and found one particular pleasure distinctive to this paper.

This is the moment when the memo has served its purpose and is crushed up to throw into the rubbish bin.

It makes a ‘scrunch” sound.

I have described it as a “scrunch” and it really is a “scrunch” sound.
It is like a signal saying “Yes, one job is finished”.

That’s right, when you empty the rubbish bin on the Windows desktop it also makes a scrunching sound.

I rather like that sound and look forward to hearing it.
This sound is somewhat similar. 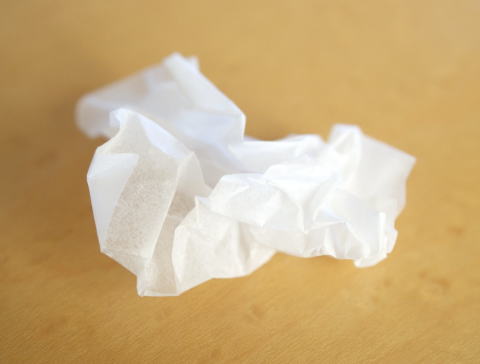